The Existing Generation Fleet and the Value of Flexibility

The US generation mix has changed considerably in the past decade. In the pie charts below comparing 2008 with 2018, three changes stand out:

Why have natural gas, wind, and solar generation increased while coal has declined? Economics suggests (using IRLE’s first prism, neoclassical economics) examining that question by using a demand and supply model. 2008 saw the beginning of the recession associated with the financial crisis. Electricity sector fuel consumption shows the decline in demand for electricity, particularly in 2009 (units are trillions of BTUs): 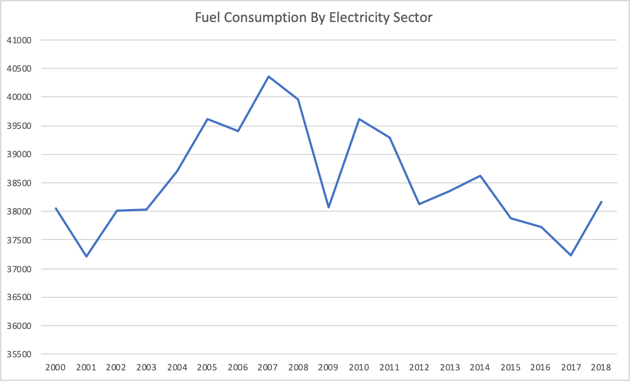 The recent overall trend in fuel consumption for electricity has been a decline from its 2007 peak, driven first by recession and since then by improvements in energy efficiency.

The supply side of the story focuses on costs, particularly the effects of innovation and dynamism (IRLE’s second prism) on generating technologies and costs. Changes in the generation fuel mix reflect the economics of technological change.

2008 is a notable year for the comparison, as it marks the beginning of the shale gas revolution that has decreased natural gas prices in the US by 47 percent, delivering substantial consumer surplus gains in the form of lower electricity prices while also catalyzing the decarbonization of electricity generation. Natural gas generation has increased 65 percent in the past decade as a result.

Hydraulic fracturing for shale gas extraction isn’t the only significant energy technological change of the past decade – both wind and solar have experienced manufacturing cost reductions and increases in energy efficiency that have made them more economical resources and more competitive with conventional generation. Lazard’s annual estimate of the levelized cost of energy (LCOE) across the different generation technologies provides a useful analysis: 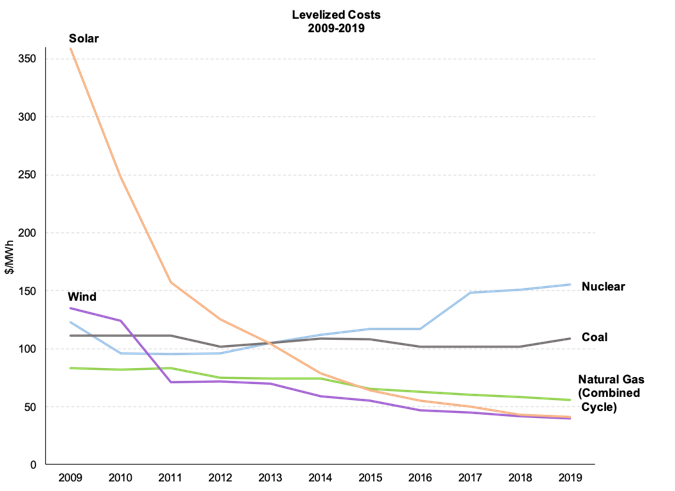 These data start in 2009, and the slight decline in the natural gas LCOE reflects both its technological maturity and the shale-induced decrease in fuel costs. Coal, too, has the relatively low and stable cost associated with a mature, heretofore dominant technology, but by 2009 the cost of natural gas generation had fallen enough that natural gas generation started displacing coal in the merit order dispatch in organized wholesale power markets. As coal was dispatched less and less, older coal plants were no longer profitable and were retired (the process of doing so in vertically-integrated states is a separate, and interesting, topic).

Wind technologies experienced significant cost declines in the early 2010s, so much so that its costs have fallen below coal’s, and more recently have even fallen below natural gas’ costs. Most dramatically, solar PV’s costs have fallen from a considerable height relative to other technologies, due to improvements in manufacturing, in capital costs, and in energy efficiency of production from the PV panels.

Different generation technologies have different capabilities and features; in economics we call that product differentiation. In the mid-20th century vertically-integrated grid dominated by coal and hydro, technologies were more homogeneous (but not exactly the same), consumers thought of electricity as a commodity product, and the environmental impacts of generation had a lower priority. Now, different generation technologies have different features, consumers are becoming more aware of the differences in and environmental impacts of electricity over the course of the day and season, and the policy environment has shifted toward decarbonization since the early 2000s. The 21st-century generation mix is more diverse and brings a variety of different capabilities.

As the share of variable resources increases (recall that it more than quadrupled over the past decade), the capability for flexibility has increased in importance. Wind’s intermittency has been balanced out by natural gas backup, and both wind and solar benefit (i.e., attract investment and get interconnection approvals) from the capability of flexibility in other, complementary, resources.

An EIA Today In Energy feature this week focused on an essential aspect of that flexibility capability: start up, or the time that a generator takes to go from shut down to full production (note this is different from ramping up and down while already turned on). The ability to turn on and be available quickly enables a system to respond quickly to changes in the availability of other resources. Hydro turbines and combustion turbines have this flexibility capability, combined-cycle turbines less so, but still more than the steam turbines that are the mainstay of the coal and nuclear units. 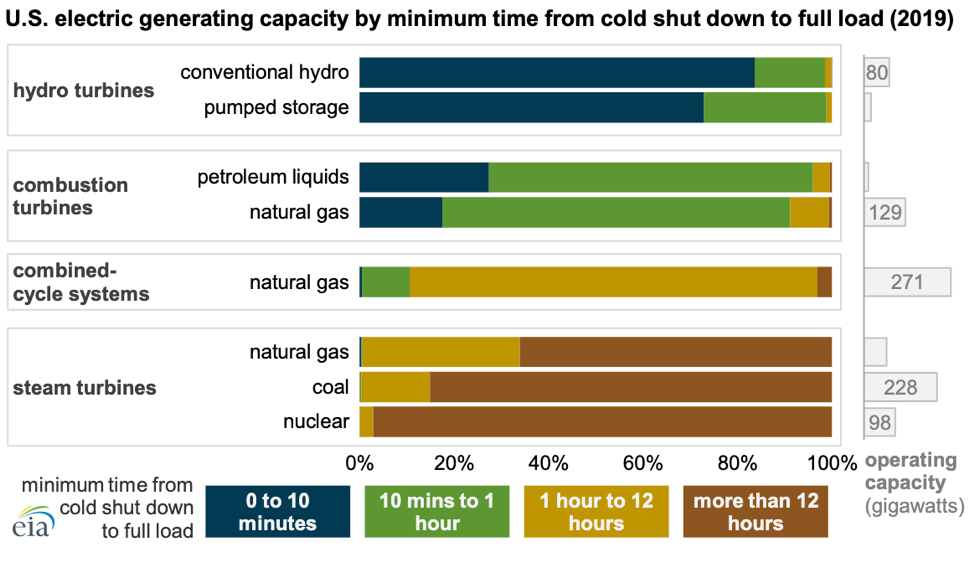 As the generation fuel mix has gotten more diverse, the value of flexibility has increased. An important market design question in organized wholesale markets will be whether and how the market rules enable that flexibility value to be reflected. A similar question in vertically-integrated states will be how to account for that value in the regulatory process, in the absence of a market process to generate informative price signals about the value of flexibility in that state.