The research described here approaches this fundamental problem using a simple idea from the field of complex systems science: When turbulent mixing is not possible, the best way to spread one fluid into another is by chaotic flow, called chaotic advection. The essence of chaotic advection in laminar flows is actually quite simple: One needs to impose plume stretching and folding as shown in the animations below. This work is the subject of two consecutive research awards from the National Science Foundation, active from 2011-2017.

These two animations, published in the Supporting Information of Mays and Neupauer (2012), illustrate chaotic advection in laminar flows by stretching and folding: 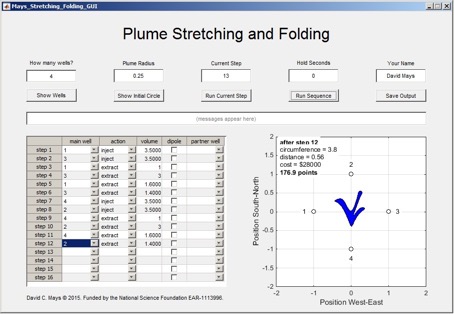 Complete details are given in the following refereed publications: